You have a WARRANTS and you on NATIONAL TV like the POLICE ain't going to find you........ 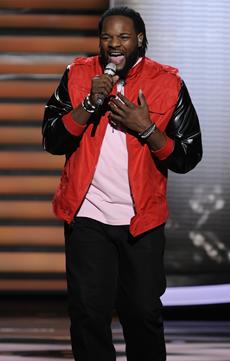 Looks like the gentle giant wasn't so gentle after all.

Jermaine Jones, the large baritone singer who returned to American Idol after being cut before the semi-final round, has been disqualified from the competition for concealing arrests from the show's producers. One of the incidents allegedly involved violence.

Jones was arrested twice in 2011 and gave police false names. He also has outstanding warrants. Idol producers learned of the arrests this week, and the show will address the issue during Wednesday's episode.

On Wednesday, Jermaine tweeted, "Awww I will no longer b on the show." His Twitter account, @jjonesai11, has since been deleted.

Jermaine had performed twice since rejoining Idol, singing Stevie Wonder's Knocks Me Off My Feet last week. He was one of the three male singers receiving the fewest votes that week.

Comment by DJ FREEZE on March 14, 2012 at 10:23am
Classic case of your past catching up to you. Karma is a bitch sometimes. Live right, that's all I have to say about that.