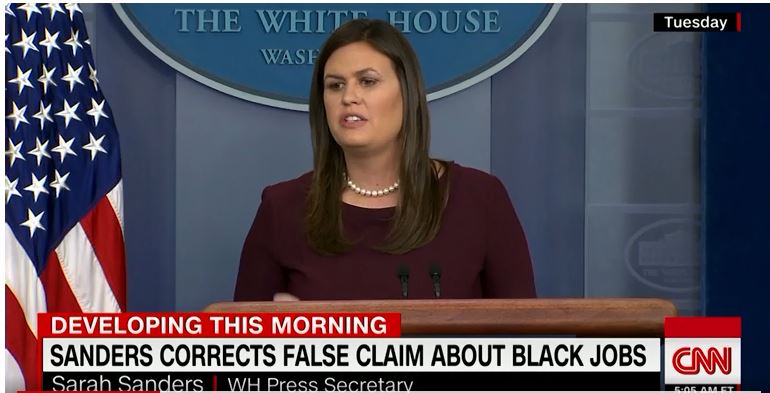 "Correction from today's briefing: Jobs numbers for Pres Trump and Pres Obama were correct, but the time frame for Pres Obama wasn't. I'm sorry for the mistake, but no apologies for the 700,000 jobs for African Americans created under President Trump," Sanders wrote in a tweet.

During the briefing, as she sought to defend the President's record on race, Sanders said Trump has already tripled Obama's record over eight years for creating jobs for black workers.

But that's not even close to true, according to Labor Department figures.

Hours after the briefing, after Bloomberg News pointed out the inaccuracy, the White House Council of Economic Advisers apologized for the figure. It posted a tweet citing a "miscommunication" to Sanders.

While it's true that the US economy has added about 700,000 jobs held by African American workers since Trump took office, it added about 3 million black jobs while Obama was in office, according federal labor statistics.

When Obama took office in 2009, 15.5 million African Americans had jobs in an economy filleted by one of the country's worst recessions. When he left office, the economy had 18.4 million black workers.

But even the correction from the Council of Economic Advisers, which is tasked with providing the President with objective economic analysis, used questionable accounting to bolster the claim that Trump has helped job growth among African-Americans more than his predecessor.

Rather than tallying job growth since Trump took office in January 2017, the advisory council posted figures that include the three months since Trump's election while Obama was still president.

The time period attributes an additional 140,000 new jobs for African-Americans to Trump even though Obama was still in office. And it attributes 162,000 African-American jobs lost to Obama though it occurred during the economic recession when George W. Bush was still president.