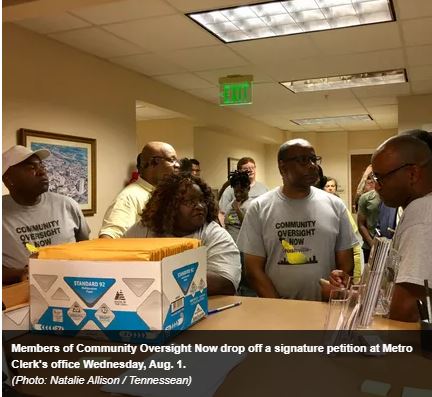 Nashville voters will decide in November whether to amend the city's governing document by creating a new civilian-led board that would review the actions of police.

The vote will send the amendment language to the Metro Clerk, who will send it back to the election commission to set the ballot.

It's poised to go before voters as claims of racial bias by the Metro Nashville Police Department have resurfaced following the release of surveillance video last week of a 25-year-old black man getting shot from behind by a white police officer during a foot-chase in North Nashville.

If the amendment is approved by voters in November, a new 11-member panel would be created with investigative and compulsory powers to review arrests and other incidents involving police.

Mayor David Briley has expressed concerns about the measure, but said he supports the concept and has vowed to create a civilian oversight board by executive order if the referendum doesn't pass.

Resistance came from the Nashville Fraternal Order of Police, which opposes the civilian oversight board, and whose attorneys argued that the group Community Oversight Now did not meet the signature threshold.

The Metro Charter says a charter amendment may be proposed to Davidson County voters if a petition is filed that is signed by 10 percent of the number of voters who voted in the "preceding general election."

The city, as well as Community Oversight Now, has pointed to the August 2016 election — which featured state primaries and local school board races — when 47,074 people voted. That meant that 4,708 signatures were required.

But the Nashville FOP, represented by attorneys David Raybin and Austin McMullen, argued the preceding general election occurred on May 24 for the special mayoral election won by Briley. In that election, 82,368 people voted, meaning the bar would be 8,237 valid signatures.

Read more at The Tennessean