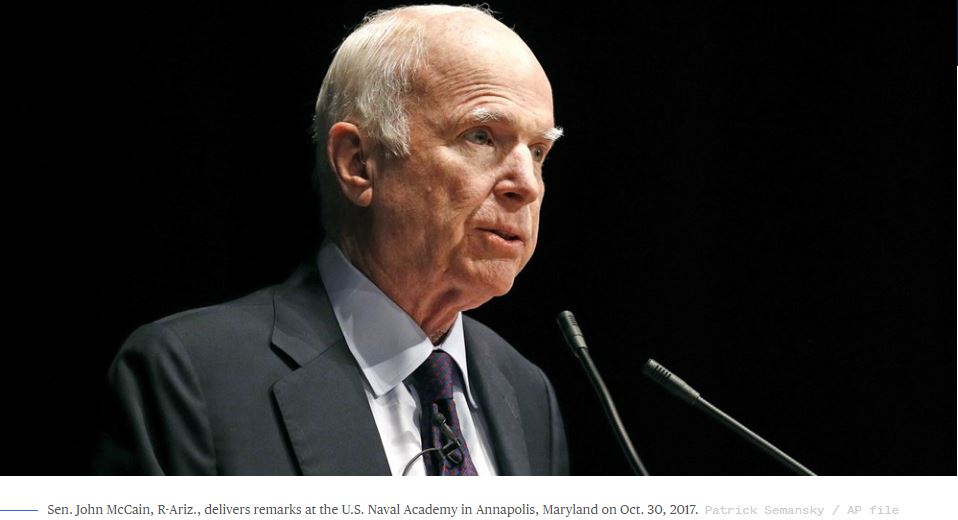 People close to Sen. John McCain have told the White House that the ailing Arizona Republican does not want President Donald Trump to attend his funeral and would like Vice President Mike Pence to come instead, a source close to McCain confirmed to NBC News.

McCain, 81, has been battling an aggressive form of brain cancer for nearly a year and is back home in Arizona after he underwent surgery last month for an intestinal infection.

The senator, the 2008 GOP presidential nominee, said in an audio excerpt this week of his forthcoming memoir, "I don't know how much longer I'll be here," according to a clip aired by NPR.

The White House did not immediately return a request for comment.

Trump did not attend the recent funeral of former first lady Barbara Bush in Houston, Texas, in order "to avoid disruptions due to added security, and out of respect for the Bush Family and friends attending the service," the White House said last month. First lady Melania Trump attended the service instead, along with former Presidents George H.W. Bush, George W. Bush, Bill Clinton, Barack Obama and former first ladies Hillary Clinton and Michelle Obama.

Former Presidents Barack Obama and George W. Bush plan to be eulogists at McCain's funeral service, which is to be held at the National Cathedral in Washington, D.C., the source close to McCain said.

McCain's wish for Trump to skip his funeral, first reported Saturday by The New York Times, comes as the two men have had a turbulent relationship, particularly since the 2016 presidential primary when Trump said McCain was considered a war hero only "because he was captured" during the Vietnam War and that Trump preferred military figures who avoided being taken prisoner by the enemy.

Last summer, Trump blasted McCain for his "no" vote that helped doom a key Obamacare repeal bill in the Senate.

When Axios reported Trump had been "physically mocking" McCain for the thumbs down gesture the senator indicated during his vote, McCain's daughter Meghan tweeted, "What more must my family be put through right now? This is abhorrent."

Meghan McCain tweeted Friday that she was heading home to Arizona "to be with my family" and plans to return to her job on "The View" on Tuesday. She added, "Thank you all again for your prayers, patience, understanding and compassion during this time. It means the world to me and my entire family."

Friends of McCain have visited him recently in Arizona, including former Vice President Joe Biden. McCain, who has served in the Senate since 1987 and in the House before that, has not returned to Capitol Hill for several months due to his cancer treatment.