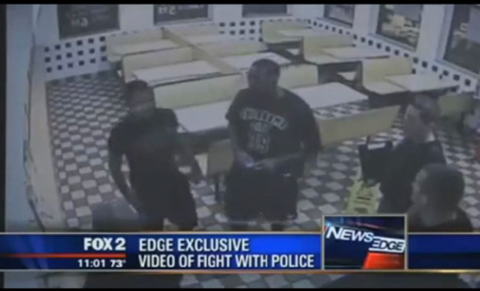 Tywonn Mitchell, 20, and his brother Naybon Moore, 26, are two college students with bright futures ahead of them. Mitchell is in college studying criminal justice and his brother is in his last year of study at law school, but what happened to them one night last month will forever stay with the brothers.

Both brothers were hungry and went to a local restaurant when they noticed they were being tailed by police. The brothers pulled into the restaurant and thought all was okay until the police pulled up to them and followed them inside the restaurant. When they were in the restaurant, the officers became verbally aggressive to the brothers and demanded to see their ID. Both brothers, being familiar with the law first asked the officers “what they had done wrong” and “why did they need to present their ID.” This seemed to infuriate the two white police officers. One officer even became physically aggressive with one of the brothers.

The officer is seen on videotape attempting to grab one of the brothers by the chest and the brother knocking away the officer’s hands. Once that happened, the officer swung, hitting both brothers in the face, then a battle commenced. The brothers, who fought for dear life and subsequently were winning the altercation, outmatched the cops. That is when one of the brothers stopped fighting and stepped back. The battered officers then reach for their service weapons while the brothers step against the wall. Moore and Mitchell were then arrested for assault on a police officer.

However, the Wayne County prosecutor’s office announced that all charges have been dropped against Moore and Mitchell. In response to the announcement Mitchell stated “I forgive them and I don’t hold any grudges for them. I hope they learned their lesson.”