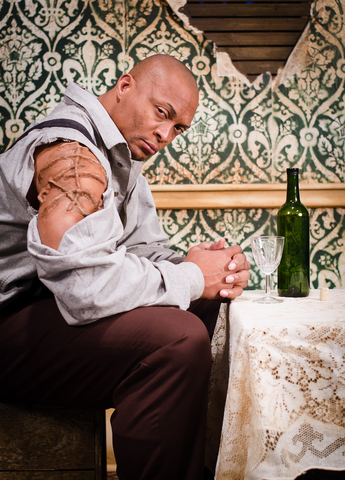 Special Discount Advance Tickets for KennyOnline.net Members - WMSAVE10
Runs February 7-21st at TPAC
Nashville, Tenn., January 22, 2015 – Nashville Repertory Theatre is proud to present its newest production, The Whipping Man, a gripping drama about the reunion of a Jewish Confederate soldier and two of his family’s former slaves, which unearths buried memories and questions of faith. The Whipping Man runs February 5-21, 2015 at Andrew Johnson Theater at Tennessee Performing Arts Center and features Heisman Trophy winner and former Tennessee Titan Eddie George in a starring role as Simon.
Winner of the 2011 Outer Critics Circle John Gassner New Play Award, The Whipping Man tells the story of Caleb, a badly wounded Jewish Confederate soldier who stumbles home at war’s end to find his family has fled their home in Virginia. Simon and John, two former slaves, have stayed behind and greet Caleb with a cobbled together Passover Seder. As the men unite to share the meal, they struggle to understand their new relationships at this crossroads of personal and national history.  This production is recommended for high school and above.
Specific performance dates and times are listed below. Tickets start at $25 for previews and $45 for regular run, and can be purchased online at NashvilleRep.org or by calling the Box Office at 615.782.4040. A Special Discount is being offered to followers of KennyOnline.net. Simply use Discount Code: WMSAVE10 or click on the following link when purchasing to have the special discount applied: