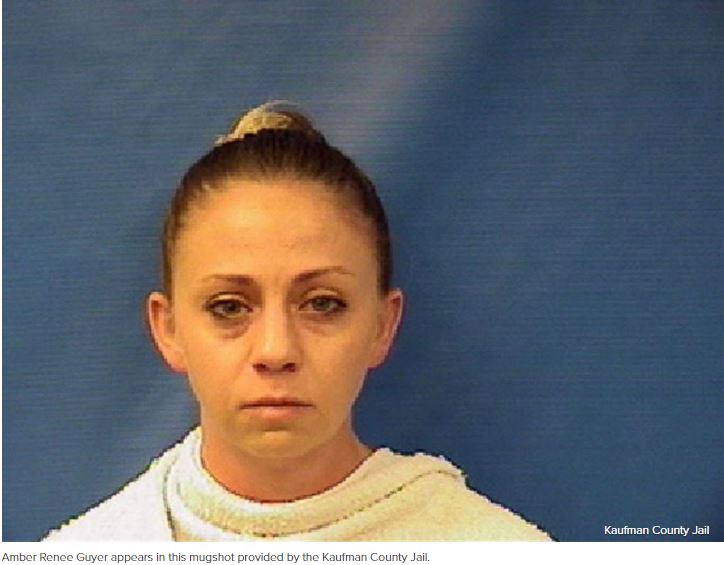 Officer Amber Guyger, 30, "engaged in adverse conduct" when she fatally shot Botham Jean, 26, at his apartment on the night of Sept. 6, Hall said in her email.

Hall said her decision to fire Guyger was made after an internal affairs investigation concluded on Sept. 9.

"Officer Guyger was terminated for her actions," Hall said in her email.

She said Guyger, who was hired by the police force in November 2013, has a right under civil service rules to appeal her discipline, Hall said.

Guyger's dismissal came just 10 days after Jean held a news conference and called for Guyger to be fired immediately.

Lee Merritt, an attorney for the Jean family, said Hall spoke with the victim's family and attorneys in a conference call on Sunday to tell them she intended to fire Guyger and explained why there was a delay in the action.

"Specifically she explained that a premature administrative suspension could have possibly implicated Guyger’s fifth amendment protections and compromised the criminal prosecution," Merritt said. "The Jean family expressed satisfaction in this explanation and in Guyger’s termination."

He described the move by Hall "as an initial victory," noting that the decision was announced on the same day Botham Jean was buried in his native country, the Caribbean island of St. Lucia.

"However, we are committed to seeing through the next steps of the process of a proper murder indictment, conviction and appropriate sentencing," Merritt said.

Merritt said his office is conducting a parallel investigation of the shooting and is preparing to file a wrongful death civil lawsuit against Guyger and City of Dallas.

Merritt and other attorneys for the Jean family -- Benjamin Crump and Daryl Washington -- also released a joint statement praising the dismissal of Guyger as "a first step towards justice for Botham Shem Jean."

"As Botham Shem Jean's family has his homegoing service in St. Lucia this week, this announcement of Amber Guyger's termination from the Dallas Police Department is bittersweet for Botham’s family," the attorneys said in a statement.

Guyger's lawyer did not immediately respond to ABC News' request for comment.

Jean -- who worked at PricewaterhouseCoopers, a multinational professional services firm with an office in Dallas -- was killed when Guyger mistook his apartment for her own and shot him when she opened the ajar door of the unit and saw a "large silhouette" that she thought was a burglar, according to an arrest warrant affidavit.

Guyger was arrested and charged with manslaughter three days after the shooting but Dallas County District Attorney Faith Johnson said a grand jury will decide the ultimate charge. She has not ruled out seeking a murder indictment.

Earlier this month, Kaufman County Sheriff's Office released video of Guyger behind bars in handcuffs and jail attire. She does not speak during the video and was later released after posting $300,000 bond.