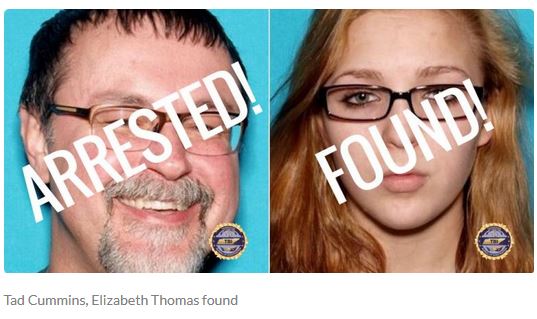 The Tennessee Bureau of Investigation says the search for 15-year-old Elizabeth Thomas is over. She has been found and safely recovered. They say they have also arrested her accused kidnapper Tad Cummins.

Cummins and Thomas disappeared from Maury County on March 13. They were last seen at approximately 8:00 a.m. at a Shoney’s in Columbia, Tenn. A friend dropped her off at that time. Her parents reported her missing later that day.

Court papers filed recently in Elizabeth’s disappearance say she was afraid of the teacher and thought she would face repercussions at school if she resisted him.

The TBI said investigators placed Thomas in Decatur, Ala. around 3:06 p.m. March 13, however neither she nor Cummins has any connection to that area. Since then, efforts to identify their exact location have proven unsuccessful.

TBI plans to hold a news conference at 3:00 central at headquarters in Nashville.