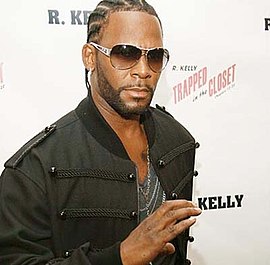 Kelly's management responded to the organization Time's Up's call to boycott the R&B singer's music because of the ways he has allegedly mistreated women. "R. Kelly supports the pro-women goals of the Time's Up movement," the statement read. "We understand criticizing a famous artist is a good way to draw attention to those goals – and in this case, it is unjust and off-target."
It later went on to say, "We will vigorously resist this attempted public lynching of a black man who has made extraordinary contributions to our culture."

Earlier in the day, Time's Up posted a call to arms urging women of color to distance themselves from the "Bump n' Grind" hit-maker. After years of allegations against the singer, including one published by Rolling Stone, the organization – an extension of the #MeToo movement with a goal of leveling the playing field in the entertainment industry for women – said that people had been ignoring Kelly for too long. It declared that it was supporting the online campaign called #MuteRKelly.

"Over the past 25 years, the man known publicly as R. Kelly has ... married a girl under 18 years of age, was sued by at least four women for sexual misconduct, statutory rape, aggravated assault, unlawful restraint and furnishing illegal drugs to a minor, was indicted on 21 counts of child pornography [and] has faced allegations of sexual abuse and imprisonment of women under threats of violence and familial harm," the post read. "Together, we call on the following corporations and venues with ties to R. Kelly to join us and insist on safety and dignity for women of all kinds ... " It went on to list Kelly's label, RCA, Ticketmaster, Spotify and Apple Music and the Greensboro Coliseum Complex in North Carolina, which is hosting a Kelly concert on May 11th.